Air support was last week called to assist in the restoration of a 15th century Cowal castle.Old Castle Lachlan, a former stronghold of the MacLachlans on the shores of Loch Fyne, has not been occupied since the battle of Culloden in 1746. It is now in serious danger of collapse at a number of points around the structure.The Lachlan Trust, which aims to conserve the buildings and places connected to Clan Maclachlan, has taken up the challenge of preserving the ancient structureIn 2007 the trust commissioned a survey and conservation plan of the castle site and surrounding landscape from the Oban-based conservation architect, Martin Hadlington, and the trust has been granted a 40-year lease on old Castle Lachlan to allow restoration work to proceed.Last Wednesday a helicopter, supplied by PDG Helicopters, lifted 20 bundles of scaffolding and other equipment from Inver Cottage car park over to the castle site as part of the latest stage in the project - erecting scaffolding to help support the castle walls and ceilings.Project manager, Marion Bowman said: “This was the easiest and quickest way as the ground around the castle is scheduled - ie protected under heritage legislation - and would have to be protected if lorries were to be used, which we decided against."Scaffolders immediately began work putting up the structure inside and outside the south west corner and in the vaulted rooms below.The executive trustee of Castle Lachlan Trust, Donald MacLauchlan, said: “The helicopter was used because it would have caused too much damage to take vehicles across the ground to the castle.“With about 30 seconds for each trip across, it really was an efficient process.”Head of operations at PDG Helicopters, Rob Hill, said: An AS350 Single Squirrel (Eurocopter) was used. The whole job took about 40 minutes.He added: "PDG Helicopters has a fleet of 19 helicopters and undertakes this type of work throughout the UK on a daily basis. This was a fairly small job and a simple task so there were no technical difficulties." 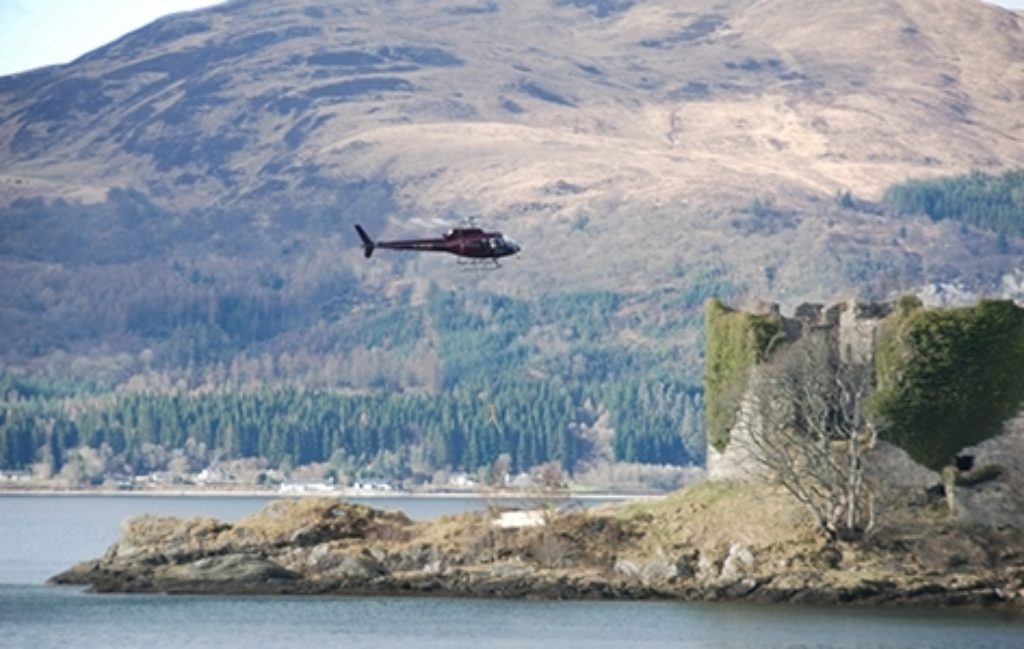 Story from the Dunoon Observer and Argyllshire Standard, Full Story